The HR Director came up to me and said, “I want you to get some business cards with Design Wizard as your job title.”

In 1986 I went to work for the DuPont Company as a Design Specialist in their Polymers Products Department. PPD was the business unit responsible for sales of engineering plastics (such as Zytel® nylon, Delrin® acetal, and Rynite® polyester), as well as variety of other polymers (such as Teflon®, Surlyn®, Alcryn®, and Hytrel®). All of these were considered “value added” types of materials which required significant technical expertise for effective use. I was hired as a mid-career level employee, which was a bit different than the norm. Most DuPont employees were lifers – meaning they would work their entire career at Dupont. They would be hired right out of college (usually at the top of their class), and would work for DuPont until the day they retired. I was an anomaly, in more ways than one. I was not hired right out of college, and my background was a little bit . . . different.

Different Background
Most DuPont employees had a degree (or two or three) in scientific fields like chemistry or molecular biology. My degree was in aerospace engineering, and while I had started out designing airplanes, I’d also designed products in several different industries, including SCUBA diving equipment, weed wackers, and silly little things like boogie boards and water basketball games. Plus my college background wasn’t exactly DuPont material. Instead of working in a research lab I had done physical labor: I delivered newspapers, I washed dishes, I even worked as a caddy. (But I was damn good caddy. I caddied in some USGA and PGA Tour events, and I’d even caddied in a Pro-Am event with former president Gerald Ford in our group). Bottom line, I had some intangibles. I’d been around the block a few times, and I had some real world experience. I was smart and personable, and I knew what it took to get things done. I was also a designer (one of those “creative types”), and I knew a little bit about designing with plastics. They knew they needed something “different” so they hired me.

Dual Career Track
At the time, DuPont had what they called a dual career track. One could pursue a traditional career of climbing the corporate ladder by going into management, or one could pursue a pure technical career with ever increasing levels of responsibility and reward. The technical ladder had very distinct rungs, with specific job titles: Technical Representative, Technical Specialist, Senior Technical Specialist, Technical Consultant, Senior Technical Consultant, Technical Fellow. (The specific descriptive_adjective for the word “Technical” would depend on the field of expertise.) They told all of us that both career paths were equally valued, and for the most part that was true. Those of us in the trenches knew the really big rewards came from getting into sales, and then making the jump into management. But still, it was nice to know that one could remain a technical professional, and still have a plan for career advancement. For a technology-based company, this was a huge career motivator for its employees.

Dupont had a tradition of announcing promotions and major anniversaries at special company events – a sales meeting, an awards dinner, a technology conference. It was a way of acknowledging your accomplishments in front of your peers. I remember the day I received a pewter vase from the manager of the technical lab where I worked in celebration of my five-year anniversary with the company. Today that vase is on display in my office. I also remember the day – actually it was in the evening – where they announced that I had been promoted from Specialist to Senior Specialist. It was at a dinner during a regional sales meeting for our division. I was asked to stand up and be acknowledged. There was a round of applause, and somebody called out, “Does this mean we can start calling you Design Guru?” I was flattered by the comment, but also a little bit embarrassed. “Come on, guys,” I said, “Gimme a break. Guru is a bit overkill.” “OK, then, what do we call you?” “How about Design Wizard,” I said, somewhat in jest. There was a moment of silence, and then the Director of Human Resources said, “I think that is a great title for a business card.” Everybody laughed, and later that night I think somebody even made a toast in my honor. “Here’s to the DuPont Design Wizard!” I don’t remember who bought that round. I do remember that at one point during the evening, the HR Director came up to me and talked to me privately. “I want you to know that I am serious,” he said. “I want you to go ahead and get some business cards with Design Wizard as your job title. Let me know if you have any problems.”

Design Wizard Business Card
A few weeks later I put in an order for a new set of business cards. I used the official DuPont order form, with all the official vernacular and cost center information. In the little box for job title, I wrote “Design Wizard.” At the bottom of the order form, I added the note: “If anyone has questions about the job title on this card, please contact the Director of Human Resources.” A few weeks later, I received a box of 500 new business cards. Eric R. Larson, Design Wizard. 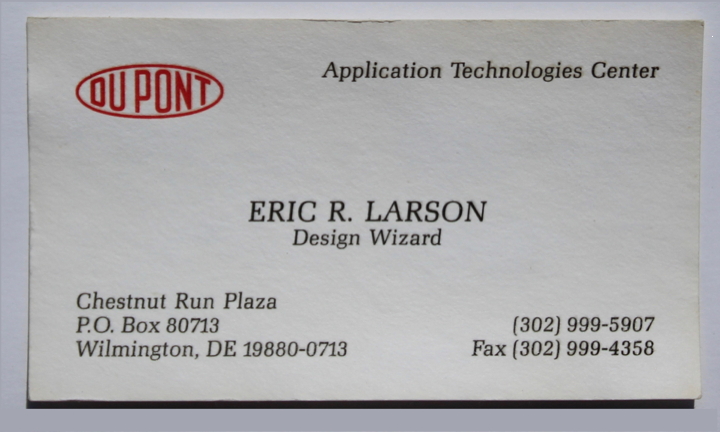 At first I couldn’t quite believe it. I didn’t know what to think. But my colleagues in the marketing group loved it. They started telling their customers how innovative DuPont was. They started promoting the DuPont Design Resource Network. They started holding DuPont design conferences. And they starting trotting me out to all kinds of customer meetings. I got to go skeet shooting at Remington Farms, I got to play golf at some fancy golf courses, and I got invited to all kinds of technical conferences. I went to a DuPont conference in Geneva, I presented a paper at a plastics conference in New Orleans, and I got invited to make a presentation at a big design conference in NYC (and afterwards we had a huge dinner at some swank 5 star restaurant). I was even asked to participate in a funky new group called the DuPont Center for Creativity and Innovation. And during the process, the company had some pretty good years financially. As a result, we all got some hefty raises and nice perks, and many of my colleagues got some dandy promotions. One former boss even went on to become a company president. It was a pretty cool time to be in the plastics business.

A few of the senior technical people were a bit miffed about all this. In hindsight, I can’t say that I blame them. DuPont technical employees have been awarded some very prestigious awards, including Nobel Prizes, the National Medal of Science, and the National Medal of Technology. Image what that would be like. You’d work your entire career to make some huge technical breakthrough. You’d get invited to a fancy dinner, get an award and a handshake from some VIPs, and then get your picture in the paper. And then here comes some young whipper snapper with a polo shirt and a CAD package and he gets to put Design Wizard on his business card. Go figure.

Moving On
Some time in the early 1990’s, the Engineering Polymers Division got a new divisional director. He wasn’t the most polished of corporate managers, or the most personable, or the best dressed. Some might say he was rough, crude, and a little bit disheveled, but he was also a cut-to-the-chase kind of guy. Truth be told, I thought he was a breath of fresh air. He held a divisional sales meeting one day, and basically said, “I don’t know what you people think of the Engineering Polymers Business. But I have been here long enough to tell you one thing. We sell nylon.” I knew right then and there that my career as a Design Specialist at DuPont was over.

But in many ways he was right. Times had changed, and technology had changed. Breakthrough products like nylon, teflon, mylar, and neoprene had gone from proprietary trademarked status to generic commodity materials. Corporate governance had changed Dupont from one of the world’s most innovative technology companies to a consumer product business. Four of the seats of the DuPont board of directors were even held by the Seagram’s family. Some used to joke that instead of a business meeting it was now a cocktail party. In the years to come the innovations in technology were going to be in things like semiconductors, LCD’s, cell phones, touch screens, iPhones, and iPads. Materials technology was going to become a commodity business. The days of Dupont as a technology leader were over.

I left DuPont in 1994, and have never looked back. In the time since then I have had the privilege to work on a variety of products that have helped change our everyday lives, including washing machines for Whirlpool, insulin pens for Eli Lilly, power tools for Skil-Bosch, printers for Hewlett-Packard, routers for Cisco, and cell phones for Motorola and Nokia. I still stay in touch with many of my former DuPont colleagues, thanks to the magic of social media. These are people I know and trust. DuPont set a standard for corporate integrity and professionalism that I don’t think any company can ever match. I am always delighted to be reconnected with my old friends. It’s really great to hear where they are now in their careers. Some have stayed in the technical field, while others have gone into management. And it always brings a smile to my face when one of them says, “How’s it going DW?”

In some ways I wish I’d stuck around at DuPont. I would have loved to become a DuPont Technical Fellow. (Although I would probably have asked to change the descriptive_adjective from the word “Technical” to something more suitable, like ”Jolly Good.” ) Still, being recognized for creativity and innovation at a company like DuPont takes some doing, especially when it comes to getting a nickname like Design Wizard on your business card.

It is a moniker I am very proud of.