Plastic – a generic name for a substance that can be formed into solid shape. From the greek word plastikos, meaning “able to be molded or formed.”

Crystalline – a solid material that has its base elements (atoms, molecules, et al) arranged in an ordered structure. From the greek word krustallos, meaning both “ice” and “rock crystal.”

Amorphous – a solid material that lacks the order and structure of a crystal.  From the greek words a – meaning  “without” – and morphe – meaning  “shape or form.”

Resin – any of a large class of synthetic substances that have some of the properties of natural resin (or rosin) but differ chemically. Resin is often used as a general term for polymers or plastics, and denotes a class of material.

Polymer –  a substance made of giant molecules formed by the union of simple organic molecules (monomers).

Polymerization – a chemical reaction involving the linkage of the molecules of a monomer to form large(r) molecules with a molecular weight greater than that of the original monomer.

Homo-polymer – a polymer that results from polymerizing a single one kind of monomer. Homopolymers have the same repeating unit in the polymer chain.

Co-polymer –  a polymer that results from polymerizing two different monomers. The polymer chain will vary with different numbers of repeating units.

Ter-polymer – a polymer that results from polymerizing three different monomers.

Thermoplastic – a polymer that softens when heated and re-hardens when cooled. Thermoplastic materials are melt processable, that is they are formed when they are in a melted or viscous phase, and are then cooled into their final shape.

Thermoset – a polymer that permanently hardens after processing. Thermoset materials are formable before processing, typically as either a liquid or malleable solid. During processing, they undergo a chemical reaction (due to heat, or the presence of other catalysts) and then cure and harden into their final shape. 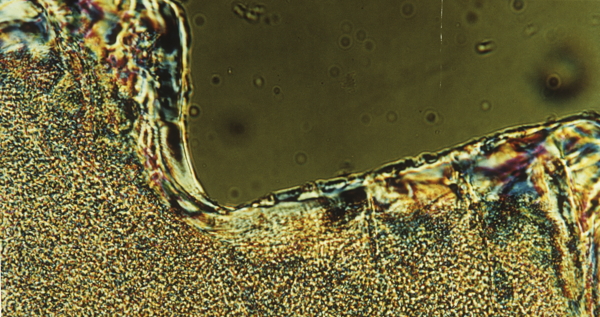 microphotograph of a cable tie, molded of unreinforced nylon
note the crystalline structure at the bottom, and an amorphous layer along the upper edge

Rheology – a science dealing with the flow of matter. In the plastics industry, the term is normally used to describe the behavior of a thermoplastic material in its molten state.

Virgin – plastic material that has not been gone through a melting process since polymerization. Virgin material typically has very high uniformity in the composition of the individual polymer molecules.

Regrind – plastic material that has been gone through one or more melting processes after initial polymerization. All reprocessed plastic material is technically regrind, and can come from a variety of sources. The term regrind most commonly refers to the material that is created when scrap plastic material (rejected or unused parts, runners, sprues, etc) is chopped or ground into small pieces. Note: Each time a polymer molecule goes through a thermal cycle, (solid/molten/solid), the molecular composition (chain length and chemistry) changes. Changes can also occur in the additives.

Resin Grade – a term used to describe a specific formulation of a given plastic material. While similar formulations from different suppliers are often interchangeable, some suppliers have unique (and often proprietary) formulations.

Additives – the processing of thermoplastics and/or their end-use performance can be greatly enhanced through the use of additives. Processing aid type additives can improve productivity of the machinery through reduction of internal friction (lubricants), changing polymer morphology (nucleating agents), removing excessive heat (endothermic blowing agents), or suppressing thermal decomposition during processing (antioxidants). Other type of additives enhance aesthetics (blowing agents, optical brighteners), or performance properties of the final parts (flame retardants, antistatic agents, ultra-violet light stabilizers, reinforcing agents, tougheners, fillers). Additives can be introduced during polymerization, but are frequently introduced to the process through compounding. They can also be introduced prior to final processing in a concentrated form via solid or liquid dispersions.

Compounding – combining a polymer with various additives during melt processing (while the polymer is in a molten state). The mixed, molten material is then extruded, cut into pellet form, and packaged for use by an end user. When the additive is a colorant, the resulting colored material is termed a fully compounded color. Since the compounding process adds cost, compounding is usually only done when other blending methods are unsuitable.

Reinforcement – a substance added to a polymer to enhance the performance properties of the final parts. These substances form a chemical bond with the base polymer. Typical reinforcements include glass, carbon, and other synthetic fibers, and mineral flakes.

Filler – a substance added to a polymer that does not form a chemical bond with the base polymer. These may or may not enhance the performance properties of the final parts, but are usually added to alter density or reduce cost. Glass beads and talc are common fillers.

Toughener – a substance added to a polymer that allows for the absorption of energy in the final parts. Typically they alter other performance properties as well.

Color Space – all of the measurement systems used to quantify color use three independent variables. (This is easy to understand when we think of a light brilliant blue versus a dark dull blue.) These three components thus create a three dimensional color space where every unique color has a unique position. Munsell developed one of the early systems using the variables hue, value, and chroma. Each system may have different names for the three variables.

Hue – the attribute of a color by which we distinguish red from green, blue from yellow, etc. It is what we think of as the colors in a color wheel. Black, white and the grays between them are called neutral colors. They have no hue. Colors that have a hue are called chromatic colors. In color space hues are arranged circularly around the vertical axis.

Value – the relative lightness of a color as measured on a scale ranging from pure black to pure white. (This attribute basically classifies a color as light or dark.) The value scale applies to chromatic as well as neutral colors. Value is also referred to as Lightness, Brightness, or Intensity. In color space value is most often represented on the vertical axis.

Chroma – refers to the strength of the color or how far it is from a neutral gray of the same value. Colors of low chroma are often called weak; colors of high chroma are often called highly saturated, strong, or vivid. For example, a pale pink would have low chroma, and a vivid fluorescent yellow would have very high chroma. In color space chroma would increase as you move away from the vertical axis radially.

L*, a*, b* – a mathematical notation system developed by The International Commission on Illumination (CIE) for the three dimensions of color space which added the concept of a standard observer (position) with standard illumination. This system, called the CIELAB system, uses the notation values of L* for value (or Lightness), and replaced the polar coordinates of hue and chroma with the rectangular coordinates a* and b*. (a* red/green axis, b* yellow/blue axis)

∆E CMC – a set of modified equations used by The Colour Measurement Committee (CMC) of the Society of Dyers and Colorists to calculate ∆E. These equations distort the scales of the different variables to give a better agreement between visual assessment and instrument measurement. In essence a ∆E CMC of 1.0 in blue is visually similar to a ∆E CMC of 1.0 in red. Our IDCFS specs (and our measurement equipment) use ∆E CMC values for color tolerances.

Color Tolerance – a color tolerance is a compromise between the difference in color values that can be perceived (what one can see) and what is acceptable and achievable in multiple samples. In essence it is a distance measurement from target, either in a specific variable direction (L*, a*, or b*), or in total distance ∆E (which is always a positive number).

Photospectrometer – a spectrometer is an optical instrument used to examine light of various wavelengths. A photospectrometer (or spectrophotometer) examines those wavelengths of light in the visible and UV range. It can give L*, a*, and b* readings, although these readings can be affected by the surface texture and metallic content of the sample being measured.

Masterbatch – a specially formulated compound which contains various additives (pigments, colorants, processing aids, etc) and a carrier. The masterbatch is typically supplied in a pellet form, which is then mixed with raw material pellets in a specific ratio (called the letdown ratio)  prior to use in the molding machine. It is essentially a concentrate with a very specific recipe.

Carrier – an inactive substance (usually another benign polymer) that is used to transmit an additive to a given polymer, and then facilitate its distribution through the base polymer during melt processing.

Pigment – a refined and purified coloring material which reflects a specific wavelenght of light to create the appearance of color. Pigments are typically prepared for mixing with an appropriate carrier.

Colorant – an agent used to impart color and/or appearance to a material. Colorants include black, white, and color pigments, dyes, metallic particles, fluorescent and pearlescent agents, marbling, and other special effects.